How NOT "To Train Up a Child" 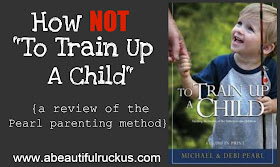 I've done a lot of praying about what to say about this book. My initial concern was expressing my opinion and making a bunch of you upset. But honestly, after spending all month reading the book, researching information about the book and the authors, watching online interviews with Michael Pearl, and praying a lot about it, I feel like I need to come right out with my thoughts.

For those of you who are not familiar with To Train Up a Child, it is a parenting book that was written in 1994. It has been widely read and translated into different languages, as well as developed a very loyal following particularly in fundamentalist Christian circles. At the same time, it has also attracted some very outspoken critics from Christian circles. It made me curious to see why it’s so divisive.

First of all, the book is an easy read as it goes. There are no difficult words, and the chapters are broken into sections that make it easy to stop partway through a chapter if necessary. Very handy. I think the ease of reading has definitely contributed to its widespread appeal.

I could beat around the bush, but let’s just get down to it: The content of the book was, to put it bluntly, very disturbing. It took me three attempts to get through it, but each time I thought about stopping, I felt that I needed to actually finish if I wanted an informed opinion. That, and I kept hoping that it would redeem itself. It was extremely difficult for me to wade through it as I kept having panic attacks. I'm talking full out heart-racing, pulse rising, panic attacks. I usually read right before bed as a way to wind down, but I got to the point where I could only read this book for twenty minutes or so before I had to put it away. There were a lot of late nights as I just couldn't get the content out of head. It did the exact opposite of winding me down.

The book focuses on the methodology of how to discipline a child into total and unequivocal submission, or as Pearl likes to put it, breaking the will and the spirit of the child. It would take me quite a bit of space to outline everything that I had issues with in the book, so instead, I’ll just hit on the highlights…if you can call them that.
I think, though, that the most disturbing thing (beyond sitting on a child) is his complete disregard for the feelings and emotions of children. With his parenting techniques, children have to remain emotionless for it to work. They literally aren’t allowed to have any feelings except to show the “happy Christian” face that we’ve come to find in so many churches across the country.

And lest you think that people won’t take him literally, I have to disagree with that. Pearl assumes that his readers will literally follow every step he has outlined. He tells a story on page 88 about a discipline issue at church and says, “the church was having dinner on the grounds (This is not eating off the ground. It is eating together outdoors.)” I like to think that most people would understand the way that “grounds” is used in this context without further explanation, but clearly he thinks and expects everyone to take his writing literally. Again, I think back to his instruction to sit on a child…

The book was so authoritarian that I started taking notes about a third of the way through it. I wish I had started sooner. There was so much more in this book that should make the list above, but due to space constraints I’m going to stop here. However, I think the above quotes pretty accurately reflect on the book as a whole. He never allows room for discussion or disagreement in the book, but rather commands his way through it as the only right way. Without any hesitation, he twists scripture to support his own twisted logic. He even goes so far as to call himself a “benevolent dictator.” I’m always so careful with wanting complete context surrounding a quote, but I promise you, with Pearl writing this literally, you have all of the context you need to know that this book needs to be avoided.

This book is a perfect recipe for physical and emotional abuse under the guise of raising good Christian children. Will you raise outwardly good Christian children using this method? Undoubtedly, because they will be so terrified and so conditioned that they won’t be able to do anything else. There is no room for grace, individual situations, personalities, or childish explorations with this method. That is very sad indeed.

Let me end with this though: This book was recommended and lent to me by a very dear friend of mine. I know for a fact that she is a great parent and thankfully doesn't use this book the way it was written. I greatly respect her, her husband, and the adorable family that they are raising together. I know that I have some readers who use this book because of how prevalent it is in some Christian circles. Far from telling someone how to parent, I'm simply asking that you examine your techniques and make sure that they do indeed line up with scripture and aren't a bunch of rules that a man has made. Ultimately, as parents, we are held accountable to God for how we choose to raise our kids. Sean and I aren't perfect and make mistakes every day, but I hope that by praying we can avoid some of the very dangerous pitfalls that books like this recommend.
Rebecca @ A Beautiful Ruckus at 8:37 PM
Share

We would love to hear what you think! Please know that all comments are on a slight delay as we approve them on our end. Thanks for commenting!